This is a quick summary of the recent updates to GPSLog Labs:

A few little changes to note while I'm busy working on something big and pretty cool:

For each of the "standard split" distances (5 km, 5 miles, 10 km, etc.) the speed/pace and time for this log are displayed and compared to that for the other activity on the same route and/or sharing the same tags using a box plot.

The above screenshot shows the speeds for that particular run using solid dots on the box plot, and indicates it was the fastest for that route when stops are removed, but that there was a long stop somewhere between the 8 and 10 km splits that made it the slowest over those distances (the smallest value is on the left of the graphs, so rightmost is best for speed and leftmost is best for pace.)

Comparing it to all the activity tagged with Run, not just along that particular route shows it was in the top 25% (after taking out the stop):

The route comparison shows two extra splits that are not available when comparing to the tag, the total distance (10.6 km in this case) and the half-way point (5.3 km). These assume that all activity on the route is about the same length, so aren't meaningful for a tag and may also not be very useful if you have a route which varies a lot in length.

Some other recent updates to the site:

As always, please send feedback and suggestions to feedback forum.

As always, feedback and suggestions are welcome and I hope everyone has a happy and safe Christmas and New Year.

Plenty of things on GPSLog Labs have been slowly improving and it's about time that I mentioned a few of them:

As always, I'd love to know what you think and hope you enjoy the site. 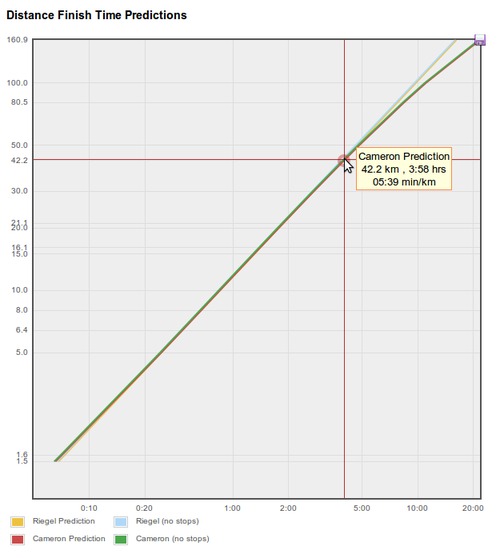 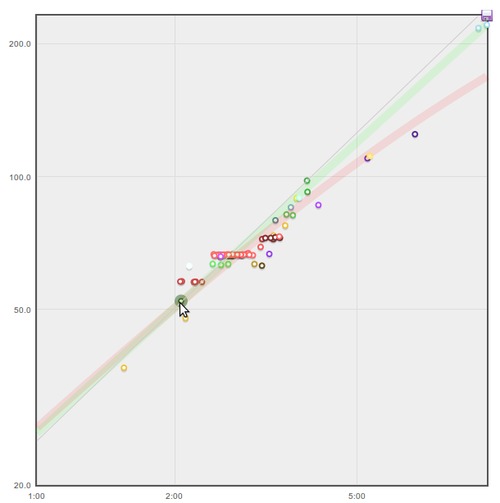 I've just enhanced the GPSLog Labs goal overall progress graph so that it now shows a prediction of the likely result based on what you've achieved so far (hopefully that's motivating, not depressing!) 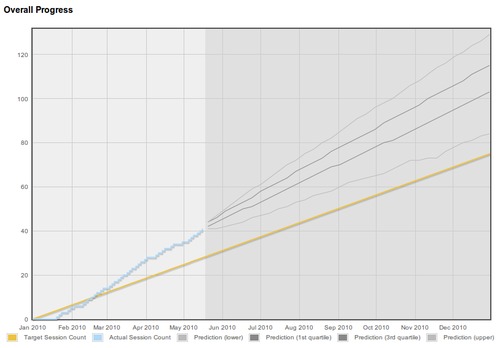 It feeds your past past weekly totals into a Monte Carlo simulator to come up with a range of possible outcomes which are added to the graph. The fainter gray lines show the upper and lower estimates, while the darkest gray lines are along the 1st and 3rd quartiles (i.e. 50% of the predicted outcomes will fall between those lines.)

This will work best for longer term goals, since it's using weeks as the unit of time, please let me know if it's not working well for your goals and I'll see what I can do.

There have been lots of little updates to GPSLog Labs since my last post and a couple of big new features that I'll preview here but will explain in full detail in future posts.

This post outlines a few of the recent updates to GPSLog Labs: